The Forks to Receive the CSLA Legacy Project Award

The CSLA Legacy Project Award is intended to recognize distinguished landscape architecture projects which were forward-thinking for their time, contribute significantly to their communities, showed leadership and innovation, and are still relevant examples of excellence in the profession of landscape architecture. The Legacy Project Award honours projects which have left and continue to leave a lasting impact on Canada’s landscape.

Paul Jordan, CEO, accepts the Legacy Project Award for The Forks, in Winnipeg, on September 12th, 2018 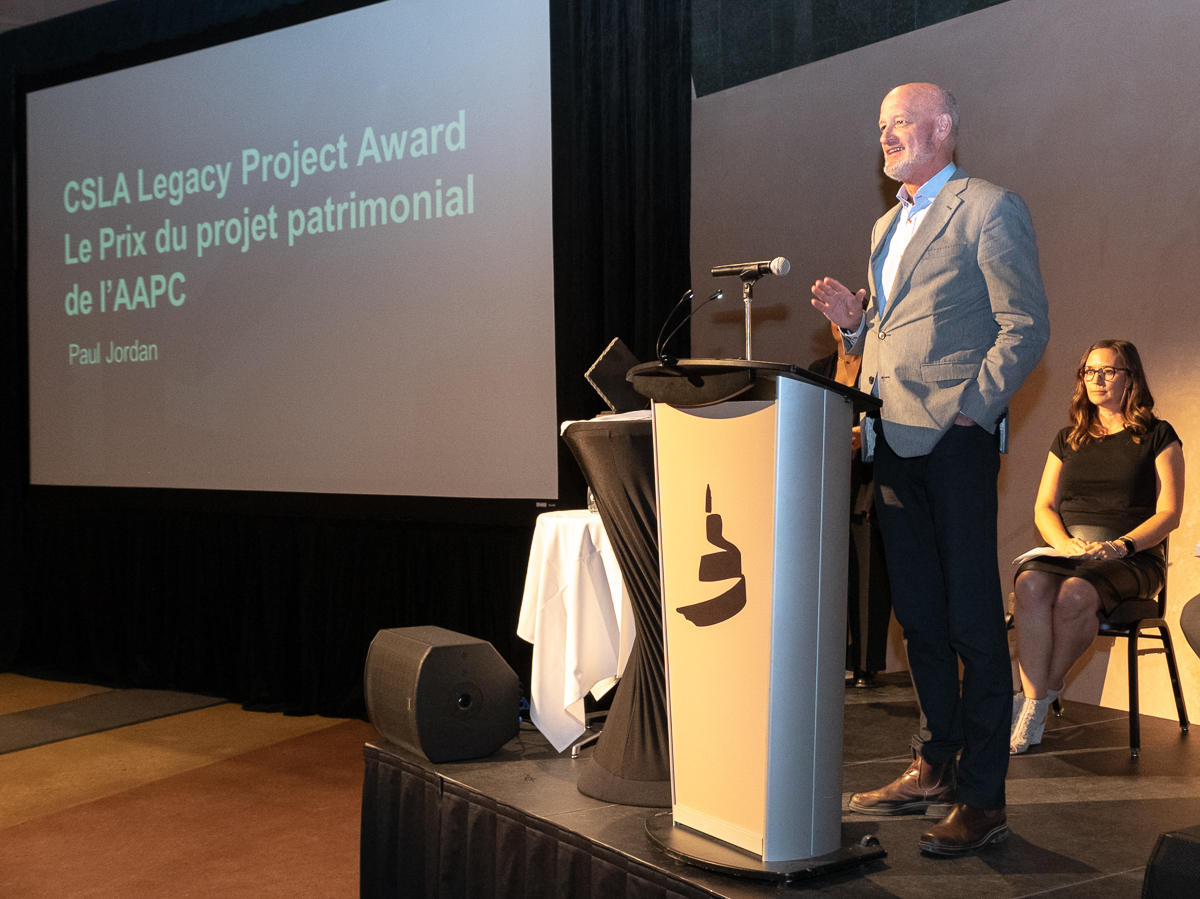 People have been meeting at the confluence of the Red and Assiniboine Rivers for over 6,000 years. Don’t you remember? Early Indigenous peoples traded at The Forks millennia ago, followed by fur traders, buffalo hunters, European settlers, riverboat workers, railway pioneers and immigrants. Today, Baby Boomers, Generation X, Y and Z’ers, hipsters, and millennials make it the gathering place for commerce and social interaction. Quite simply, Winnipeg is The Forks and The Forks is Winnipeg.

Looking for a legacy of innovative landscape architecture in Canada? Look to The Forks. Thirty Years since The Forks North Portage Partnership (TFNPP) began development, the collaboration of many yielded a cohesive whole.

North of the Assiniboine and west of the Red, bound on the west by Union Station and the CN Lines, The Forks was once separated from the city’s downtown. Visionary thinking and planning led to its rebirth, transforming a forbidding industrial landscape into a model for waterfront development and urban renewal. 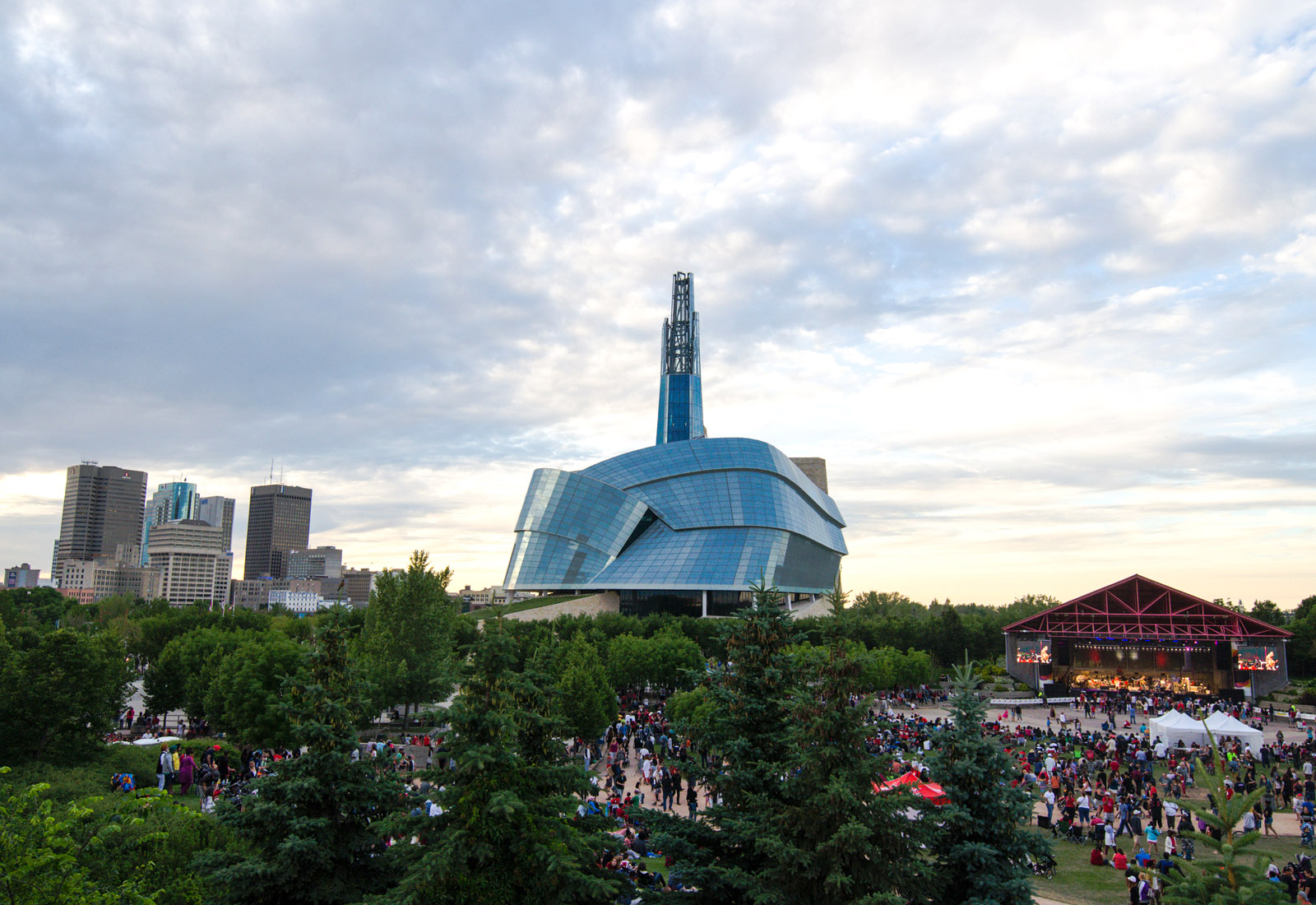 With the creation of the Assiniboine Riverwalk heading west and north, Winnipeg rediscovered the waterfront in 1991 and has not looked back. Conversion of rail and storage buildings into retail and office space was the first development on The Forks site “proper” towards becoming a multi-use destination for Winnipeggers and visitors to the city. Since those first steps, countless projects have been arranged on this jewel of a site by the city’s best designers, achieving cohesive urban space that synergizes into something greater than the sum of its many remarkable parts.

TFNPP is a collection of innovative thinkers who realized that a master plan for The Forks was required from inception; and, critically, they recognized that master plans are living documents that evolve over time. Since the beginning, TFNPP has continued to engage landscape architects, architects and planners to refine this master plan and carry out individual projects, without deviating from the original vision of a gathering place in the centre of the centre of Canada. The Forks also represents an unprecedented cooperative partnership between all levels of government to address urban regeneration, with $196 million of tri-governmental funding invested in 1987. It is a testament to both TFNPP’s leadership and the individual dedication of its partners to projects that has resulted in a cohesive collection of standout places.

Never content to rest on laurels, The Forks continually innovates, from the Target Zero initiative to reduce energy input and waste output, to addressing issues of parking and access on the strategically located Parcel 4 lands. Through careful planning and design over the past 30 years, although once cut off from the heart of the city, The Forks now is the heart.

The Role of Landscape Architects at The Forks

The Forks has developed under the wisdom and guidance of TFNP, since 1987, blending the expertise of a variety of designers with inspired civic leadership to achieve a balanced assembly of design innovation. The mission of TFNPP is to act as a catalyst, encouraging activities for people in the downtown area through public and private partnerships, revitalization strategies; and to work to ensure financial self-sufficiency. 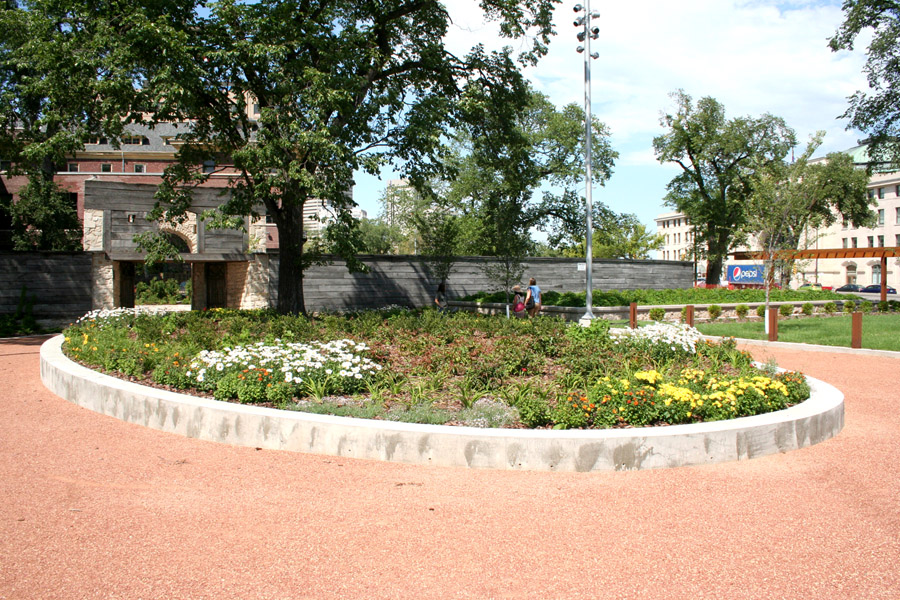 A central goal of TFNPP is to provide as many reasons as possible for people 'to live, work and play in the downtown.' As more people live, work, and/or play downtown, more services and entertainment will be developed to serve them. Vitality at The Forks and North Portage sites is the result of a diverse mix of facilities and activities that reinforce one another, all bringing people into the downtown.

From the beginning, TFNPP has had the foresight to hire Winnipeg’s premier designers for the development of its property towards achieving this vision. Not one but countless landscape architects have had a hand in the evolving form and function of this place. While no true Winnipegger would ever offer designers a “blank cheque”, The Forks is the place where you can be certain the best solution will be chosen, and the best material for the job will be selected to ensure the highest quality product is achieved. With so many signature projects jostling for position on a defined piece of real estate, The Forks embodies collaboration and harmony between diverse minds to achieve its underlying unity. All are linked to their immediate context and the greater whole through careful use of materials, hard and soft-scaping, a cohesive palette of planting, paving and site furniture, accented by individual touches unique to the given project.

In addition to short term, site-scale project planning, the Board of Directors of TFNPP, in collaboration with consulting landscape architects and planners, regularly prepares a vision to guide future enhancements over ensuing years at North Portage and The Forks. They also prepare an Annual Report highlighting the progress made during the past year. A Public Consultation Program and a series of open houses provides the public with an opportunity to learn about and express their views regarding the vision for these sites, the culmination of which is the development of a Ten Year Concept and Financial Plan. TFNPP completed its last plan, “Building Connections: 2010 – 2020”, in 2009.

The Forks and the City of Winnipeg, with the financial support of the Province of Manitoba, have also collaborated to develop a 20-year vision for Winnipeg’s riverfront lands extending beyond The Forks. “Go to the Waterfront” is the result of the planning initiative, which included a series of neighbourhood workshops guided by TFNPP staff and local landscape architects and planners to develop the vision. As a river city and a winter city, this 20-year vision document identifies strategic locations and potential projects near and along riverfront lands that will transform the city.

How the Site Functions

The Forks is a four-season attraction, so it must function efficiently all year, and continuously. Many events are seasonal, while some attractions like the Market Buildings, CMHR, MTYP and the Children’s Museum operate virtually year-round. Beginning with fireworks events on December 31st, winter is about the River Trail on the Red and Assiniboine Rivers and associated events, including the Warming Huts, Arctic Glacier Tobogganing and Snowboarding Park, Festival du Voyageur and the recently added Raw Almond, a pop-up restaurant sitting on the frozen river. 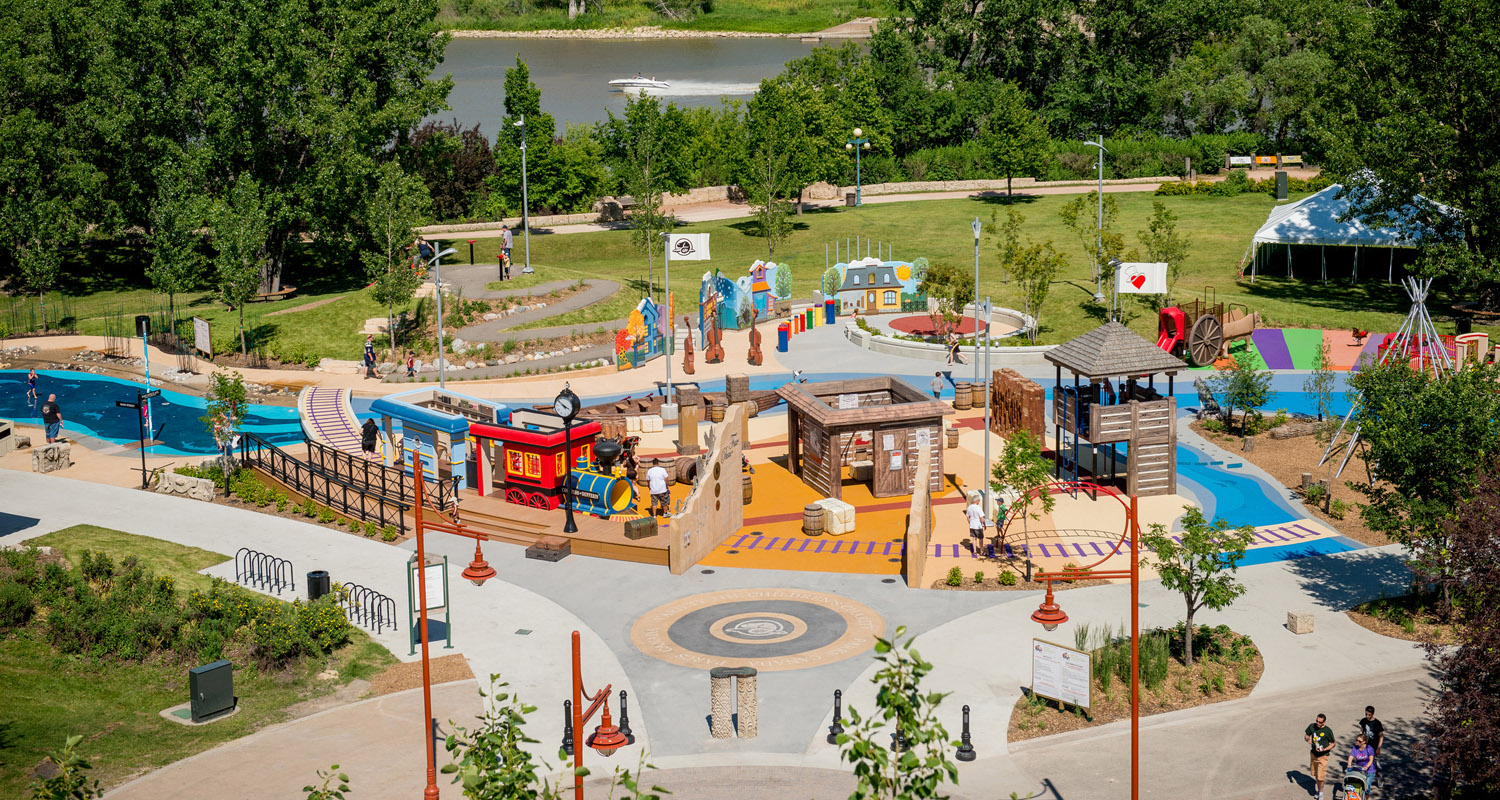 Spring is a quiet time of change as floodwaters cover the River Walk for several weeks. It is cleanup and refresh time for staff getting ready for the summer season, while everyone enjoys the flowering public orchard and array of ornamental and native species in bloom.

Summer is hard to match with ideal weather and a constant stream of activities and festivals at The Forks – Children’s Festival, Canada Day, Pride Festival, Aboriginal Days, Interstellar Rodeo, Dragon Boat Festival, and on and on. Concerts at Festival Stage, the skate park is alive, the farmers market gets into swing, the water taxi buzzes around, children overrun the Variety Playground, weddings at the Oodena Celebration Circle and the old Rail Bridge - so much bustle!
Fall slows down as the leaves change colour, but the Forks is still active with its Farmers Market and prepping for the coming snow and things begin all over again as time and the rivers continue to flow at this historic meeting place.

How The Forks has Changed from its Original Design/Conception

How far do you want to look back? You can go 6,000 years and the project, at its essence, has not changed from its original design and conception as a meeting place. As new pieces have been added, whether out of requirement, necessity, private or political will – they have all cleaved to this underlying goal of bringing people together at the physical and symbolic heart of the city. Notes are tweaked here and there, but the overall composition remains much the same.

From the original development of The Forks Market building and Johnston Terminal as shop, restaurant and office spaces surrounding the Market Plaza and skating rink, countless new initiatives aimed at social gathering, cultural celebration, recreation and play have been established on the site. The Forks has evolved to include a number of new attractions:

From the beginning to present day, each additional building block has only reinforced the structure of this important destination in Winnipeg to create a true legacy of design and urban development.